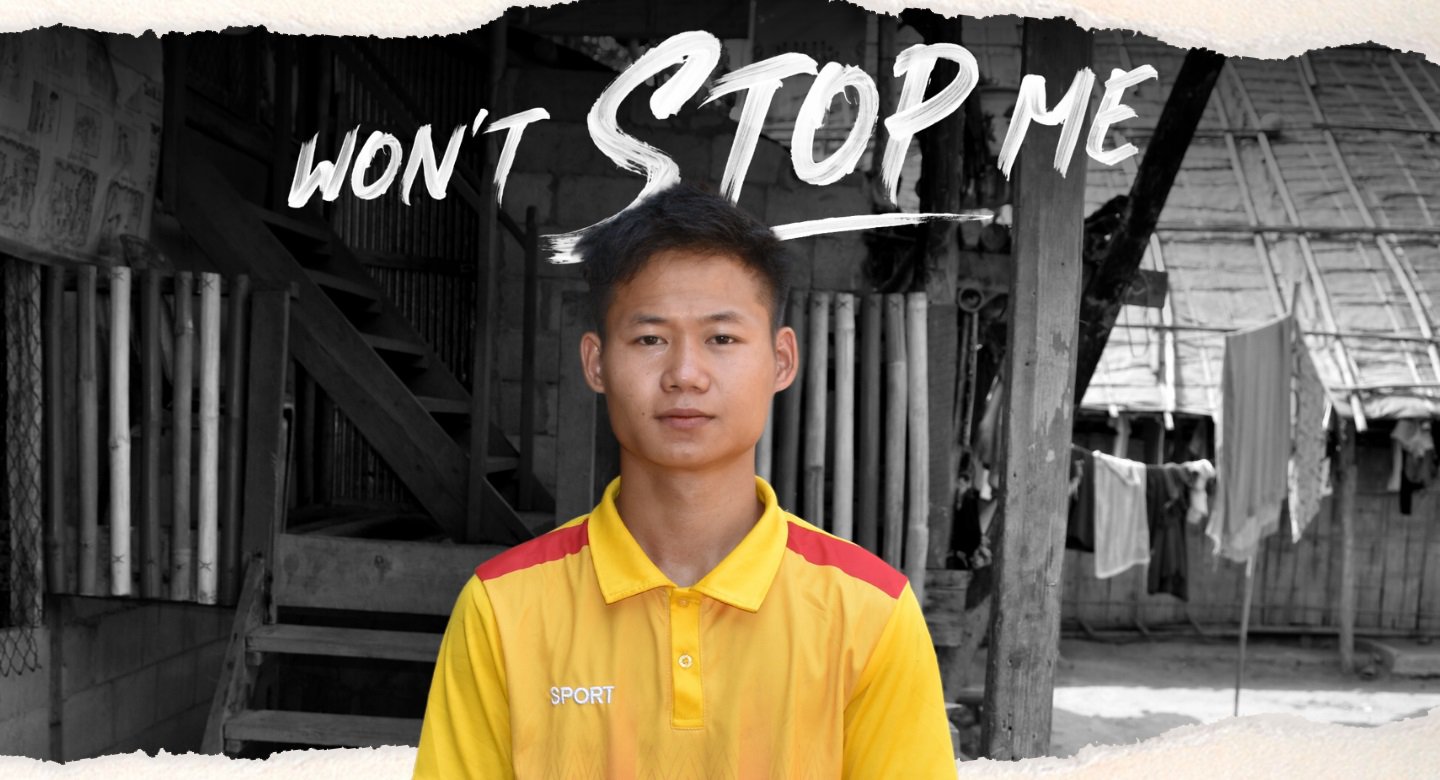 A Community in Crisis

It’s the end of the school day in Mae La, Thailand’s largest shelter for displaced people, and tempers are flaring. A young man, feeling insulted by another classmate, is fuming while the rest of the class heads out for the day. He’s clenching his fists in anger, preparing himself to confront the classmate who embarrassed him.

But before he can act, Kyaw, a fellow student and junior leader in the local youth club, sits down next to him. Kyaw’s noticed the young man’s upset, and he starts talking to him. At first the angry young man resists, but soon he’s listening as Kyaw talks about the need to make good decisions and to solve his problems peacefully.

When the young man expresses his shame and frustration, Kyaw lends a sympathetic ear, and before long, the young man has forgotten about fighting. Kyaw escorts him out of the school, keeping the conversation up, and by the time they reach the young man’s home, both of them are laughing and cheerful. Kyaw knows what it’s like to feel the same overwhelming emotions as the young man, and it’s the personal growth he experienced in a Right To Play leadership club that’s turned him into a peacemaker and mediator for fellow youth who need help.

Mae La is home to more than 50,000 Karen refugees who have fled government persecution in Myanmar, part of a larger diaspora of more than a million Karen who are living in Thailand as refugees. Most are unable to return home due to ongoing threats and violence along the Myanmar-Thai border. Conditions are hard – most refugees are impoverished, and few are allowed to leave the camp for work. The result is a community strained to the limit as it tries to hold onto its identity and pass it on to a new generation. Alcohol abuse, domestic violence, brawling, crime, and other antisocial expressions are common. People distrust the police, which makes the role of community mediators like Kyaw crucial. 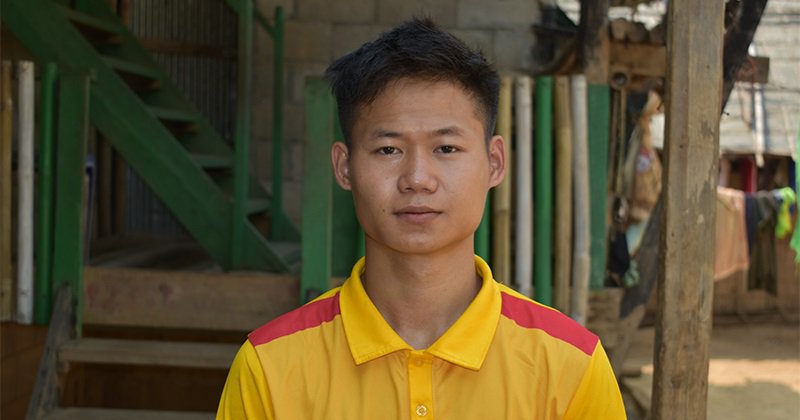 Kyaw is a 19-year-old Karen refugee living in Mae La. He hopes to one day become a doctor.

Kyaw’s no stranger to any of this. He’s lived in Mae La since he was just two years old, after he fled Myanmar with his parents. Growing up in this unstable environment affected his mental and emotional health and challenged his ability to hope for something better. As a boy, he was prone to fits of anger. He would smash things and hit people, imitating the ways the adults around him acted when they were mad. As he grew, the anger turned inwards at himself, and led him to self-harm. Everything in his life seemed to be falling apart or a dead end.

“I learned about the value of myself and others, and how to manage my emotions.” – Kyaw, 19

Things came to a head when Kyaw was 17, when he and his brother got into a fight, and Kyaw left his family’s home. He stayed with friends, living in a haze of boredom and anger, and started skipping school. He spent an entire month miserable, and even contemplated suicide, but one of the friends he was staying with talked him out of it. The friend encouraged him to go home and get back into school. When he returned to school, he encountered Right To Play, and it marked a turning point in his life.

Turning His Life Around

At school, a fellow student suggested to Kyaw that he get involved with a junior leadership club that had been set up through Right To Play’s Achieving Change Together program (ACT). Kyaw wasn’t sure what to expect, but he was surprised from the very first game he played with the other members. The game was about solving problems and making smart decisions, and it left Kyaw reflecting on his life.

“It helped me reflect on how I made decision in the past. It guided me to see the positive and negative sides of situations and led me to make better decisions... I learned about the value of myself and others, and how to manage my emotions,” he says.

He went back to the club and played more games, ones that taught him how to manage his emotions, consider the perspectives of other people, and collaborate with other youth to accomplish shared goals. The energy he used to spend brooding now went into thinking about how to put the lessons he was learning to use in his own life.

Kyaw started to realize that he could resist his brother’s provocations. His relationship with his mother improved. Instead of acting out when he was angry, he started taking a step back and trying to control his emotions in difficult situations, and how to calm other people down as well. His mother was amazed at the change in Kyaw. At a camp meeting organized as part of ACT, she told everyone “Since my son joined the youth club, he has totally changed. I am so happy, and so proud of him. Now he spends most of his time helping the community.”

“Since my son joined the youth club, he has totally changed. I am so happy and so proud of him.” – Tin, Kyaw’s mother

The club also gave Kyaw a sense of a larger purpose. Part of the mandate of the ACT program is to train junior leaders in communities, and to set up clubs where they can connect and learn from each other. The junior leaders then help to promote social cohesion in their communities, bringing parents and children together to spend quality time with one another, mentoring younger children, organizing activities like cultural festivals in the camps, and helping community members with their problems.

The ACT program also aims to help young refugees meaningfully participate in society by helping them develop life skills, bringing them together to collectively boost their voices, and encouraging their participation in decision-making within their community. For a young man like Kyaw, who was looking for something bigger than just surviving, this chance to give back and feel connected to his community was one of the strongest draws. Since ACT began in 2017, the number of children and youth who state they are able to appreciate the value of themselves and others has increased from 9% to 84% as a result of their participation in the program. 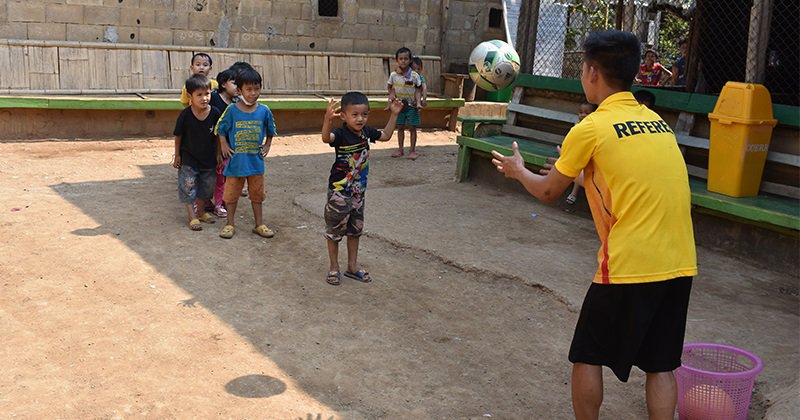 Kyaw leads young children through an activity as part of his peer mentoring work.

Kyaw has now completed grade 12, and is studying in a vocational class. He dreams of one day becoming a doctor. He is also continuing to help with the club, mentoring younger students and leading them through the same kinds of games and activities that once helped him. He knows they need every chance they can get to be able to overcome the challenges they face. The long-term legacy of the ACT program is empowered junior leaders like Kyaw, who will carry on helping the community.

Kyaw and the older members of the club also continue to try to make Mae La a better place, with a stronger sense of community and social responsibility across all generations. They use their peacebuilding skills to prevent or break up fights, to help community members in need, and to reconcile families that are at odds. It’s an incredible set of challenges for young people to take on, but Kyaw is energized by it.

“I’m motivated to create an impact in other people’s lives and to spend time with the community. I can help my friends, my community, and myself. I know my own value now, and I want to make change all around me,” he says.

By continuing to browse or otherwise use our site, you agree to the storing of cookies on your device to enable the functions of the website and for tracking performance as described in our Data Protection and Privacy Policy. I Agree